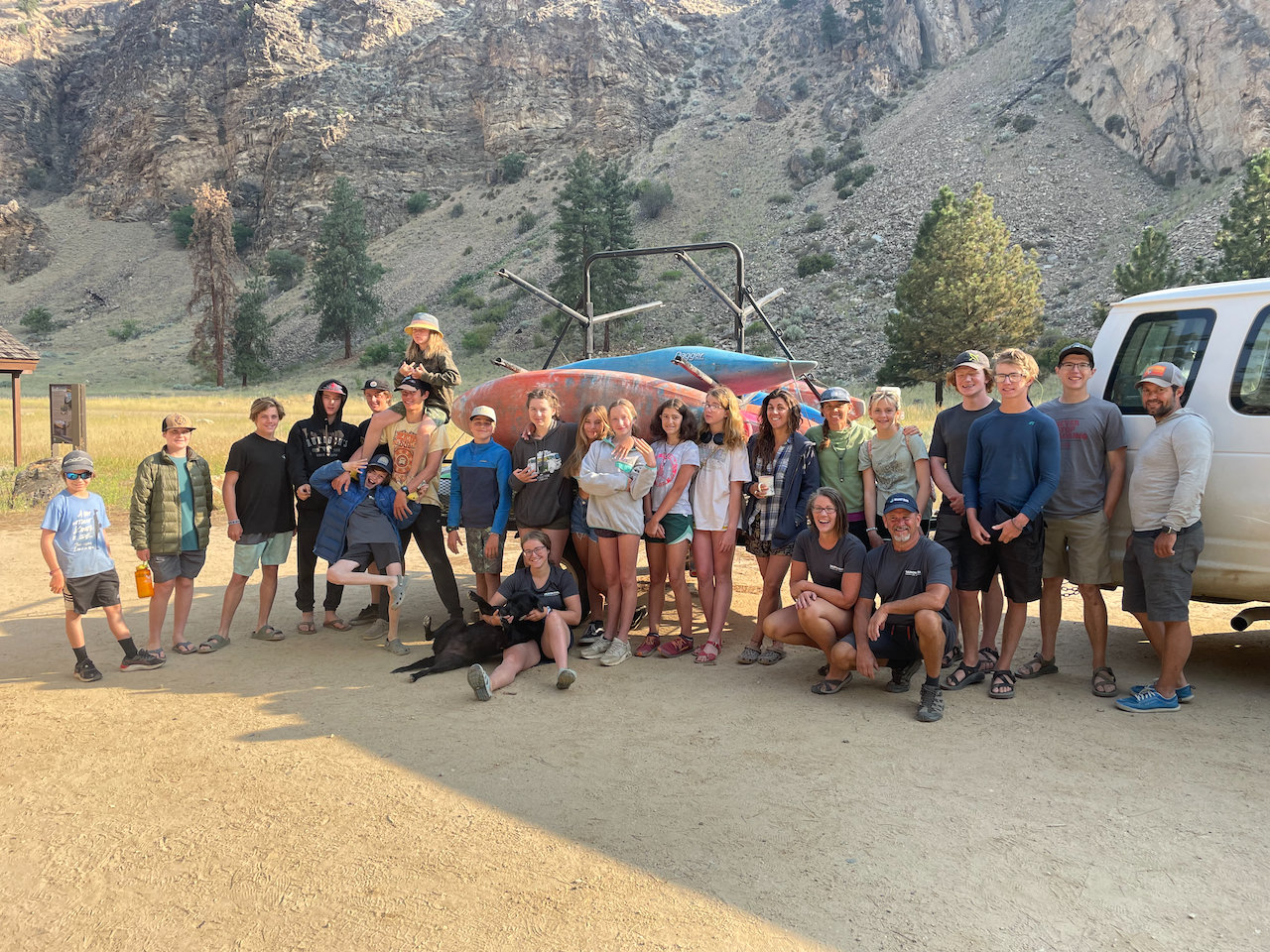 This is the third, and final installment, of a three part article on the 2022 Moose Fire in the North Fork/Salmon Idaho area and The Salmon River Adventure Company aka ‘The Old Boy Scout Camp’.

On the morning of Thursday, July  21st, I awoke to the smell of smoke. Ugh…It was faint, but the winds had changed brining with it the reminder of what was going on upriver. It was also on this day that Craig and I were paroled from evacuation camp to join the others on the river for the day. We traveled up river to the old mining area of Shoup to launch for a day’s float on the Salmon River. It was a fun-filled day full of smiles and laughter as we kayaked and rafted through the infamous Pine Creek Rapids. We swam and cliff-jumped into the cool river water. We ate riverside lunch on the white sandy shore at Poison Ivy Beach. Yes, its loaded with bright green leaves of three! After lunch, the campers and coaches played a game called “King of the River” as they tried to see who could stay on the big boulder that barely pokes out of the river as the current passes by. It was a great day! I greatly enjoyed watching the campers kayak, looking like a handful of brightly colored Skittles as they floated down the river. Little did we know that the BLM and Forest Service Ranger vehicles driving up and down the road, were looking for us.

After lunch, Craig and I peeled off from the group in some inflatable kayaks to get back to Cove Creek sooner so we could get started on the evening’s scrumptious meal. As we were cooking, and after the campers arrived back to evacuation camp, the Ranger vehicles aggressively drove down the main road and turned into our camp. I guess someone the day before took notice and took pictures of the camp we had setup in the “No Camping” area of Cove Creek and called us in to the powers-to-be. Maybe they had just gotten off the Middle Fork and had no idea what was going on up river? Or maybe they just had an issue with a group of people taking over the Cove Creek Boat Ramp? Either way, no one in the vehicle asked us about camping in the “No Camping” area. It would’ve been helpful if we could’ve had a conversation with them about what was going on before they made the call.

Unfortunately, Polly was not with us at the time to talk with the Rangers directly, as she had gone back to Base Camp earlier that morning. And, Polly was not able to come back to Cove Creek as the fire was about to breech the boundary of Base Camp, and the main road was once again closed. The Rangers told John Snell, co-owner of SRAC, that we needed to vacate Cove Creek immediately.  I guess the Rangers were unaware of the deal made with Polly by the Forest Service powers-to-be, whom told us to evacuate and setup camp at Cove Creek, so that we could continue with our youth kayak camp. Thankfully, John was able to negotiate with the Rangers to at least let us stay the night. This allowed us some time to get word to Polly about what was happening so she could get things worked out. Thanks to Polly’s determination, things were able to get worked out with all the powers-to-be, and we were able to stay put until the last day of camp.

Saturday, July 23, I awoke to smokey skies. At least the smoke held off until going home day. After breakfast, we tore down camp and loaded everything back into the cargo trailer. It was time to say good-bye to our Cove Creek Boat Ramp evacuation camp and travel up river to meet parents in North Fork. A Forest Service pilot car was staged near the Spring Creek Boat Ramp area to manage traffic in and out of the area. We asked the Forest Service personnel, who was manning the pilot car staging area, if we could drive to Base Camp, prior to the pilot car taking us out to North Fork, so we could pickup gear needed before ore heading out with the pilot car. She granted our request. As we drove closer to Base Camp the skies grew thick with smoke and ash started falling on our vehicles. I could see flames from tree torching on the south side of the river where the fire was burning in some steep rugged Bankside. This rugged terrain is what made it so difficult and dangerous for fire personnel to deploy direct suppression in areas the fire touched. It was a somber and eerie sight as we drove along the northside of the river towards SRAC Base Camp.

Once back at Base Camp, the sight was like that out of an apocalyptic movie, and the only sounds that could be heard were that of water pumps and chainsaws. The water pumps were taking water directly from the Salmon River and sprinkling it on the grounds surrounding camp. The Idaho City Hot Shot Crew were continuing with fire suppression cleanup removing brush and limbs from trees with their chainsaws. My cousin, who has been wildland firefighting for 3 decades, once worked with the current Idaho City Hot Shot Crew Superintendent Brain Cardoza. According to Tommy and Polly, Brian “got stuff done” at Base Camp! Thank you Brian and his outstanding Hot Shot Crew, and to all of the Hot Shot Crews, including the Teton Crew – a Type II incident team who helped save our properties along the Salmon River!!

When we arrived at Base Camp, Tommy was not there. We collected the items we needed, said our goodbyes to a few, and loaded up. We had to be ready when the Forest Service Pilot vehicle drove by to get our escort out to North Fork. While in the driveway waiting, a truck heading westbound stopped and out jumped Tommy. We got to say Hi and Goodbye, before the pilot vehicle whizzed past. While standing on the road and taking picture by the SRAC sign,  another truck pulled up and greeted Tommy as ‘SUPE’ to which Tommy responded, “that’s not me.” From all the hard work he and Jason labored with on grounds cleanup, Tommy did look and acts the part. Since the fire was imminent along the Salmon River and traveling downriver, access to the river was greatly restricted. As a result, some of the SRAC trips had to be cancelled and it was not safe for staff to just hangout at Base Camp.

It was almost the end of the season and bunch of the staff, who are college students, were shortly returning back to school. Grace, my daughter who was working as an intern at SRAC for the season, also came home to wait things out. Thankfully, we live only three hours away, so it is easy for us to return to help on short notice. On our journey upriver towards North Fork, we passed the Chinook that crashed killing its two pilots – Thomas Hayes, 41, of Post Falls, Idaho, and Jared Bird, 36, of Anchorage, Alaska. While at evacuation camp in Cove Creek, we had heard about the crash. It was surreal to drive past it. There are two GoFundMe campaings: one for Jordan Bird, Jared’s wife, and the other for Thomas Hayes which after funeral and other expenses to Tommy’s father will be donated to the Wildland Firefighter Foundation. Wildland Firefighting Foundation was created to help provide financial support to the families of those who died or were injured in the line of duty while fighting wildland fires. Thank you Tommy and Jared for your service in protecting our wild lands!

Our caravan arrived at The North Fork Store to meet parents for pickup of their children from the Kayak Camp. We fueled our vehicles, purchased some provisions, said our final goodbyes, then turned northbound on Hwy 93 for our journey home. I was engrossed as we drove along Hwy 43 eastbound through the remnants of the Trail Creek Fire of 2021. Bright green grasses and willows, wildflowers, and thick forests of standing black Lodgepole Pines dotted the landscape. I spotted mushroom hunter vehicles parked on dirt pull outs and fly fisherman in the creek that parallels the highway. As ravaged as parts of the landscape still apear, it’s encouraging to see the revitalization and birth of new growth that fire brings. I anticipate and am encouraged about the regrowth of the area from the Moose Fire. Thank you Alderspring Ranch for your inspiring article and the reminder that not all forests are devastated by fire. They can be devastated by disease and the only tool that can make them healthy again is…FIRE.

NOTE: If you’ve missed the prior installments of The Moose Fire article, you can find the first one here and the second here.

Do you have what it takes to be a Hot Shot?

Do you have what it takes to be a Hot Shot? Check out this video, it might inspire you!