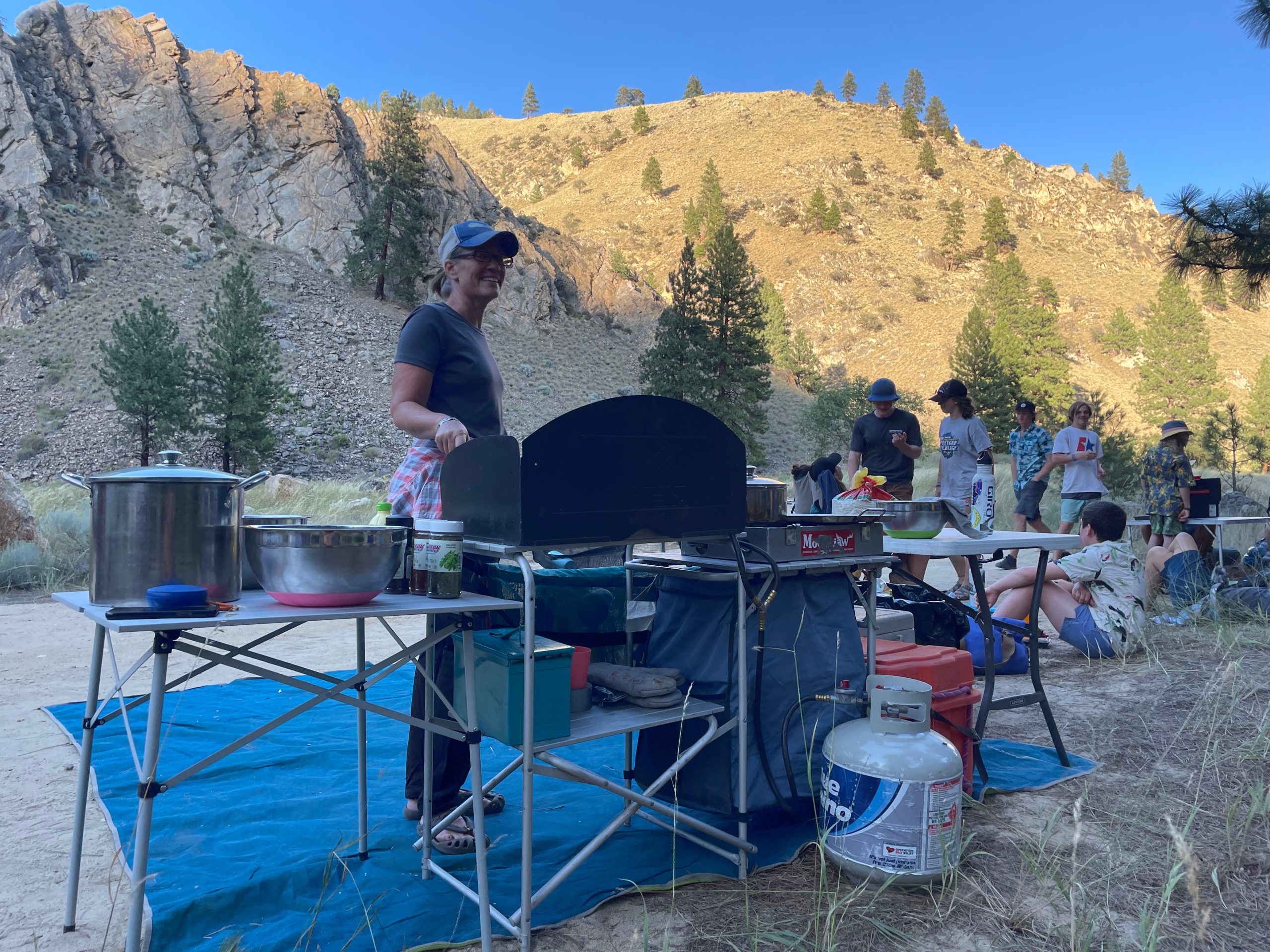 It’s out! Although it burned for over 100 days, The Moose Fire is now covered in snow.  Burning just over 130,000 acres, including the area just behind the Salmon River Adventure Co. Base Camp, The Moose Fire became the largest wildland fire in the United States for the 2022 season. In late October when I last checked the InciWeb website, it stated that the fire was still smoldering and creeping near the City of Salmon’s Municipal Watershed area. But rain and snowfall were predicted for the Salmon area in the coming days. This much needed precipitation helped greatly in the efforts to extinguish this colossal event.

Did the Moose Fire reach Base Camp? Yes, the fire did engulf the Forest Service Property that backs Base Camp the night of July 22nd. Although Base Camp did lose the waterline from the spring in the draw south of camp, thankfully, no structures were lost! But, Base Camp did get a good clean up with with help from a few of the Kayak-Camper-Dad’s who stayed behind to help Tommy, and Jason, staff member extraordinaire, defend the property. Both, Jason and Tommy, worked tirelessly long hours on fire mitigation prepping Base Camp for what was to command what could come again.

As much as fire is destructive, it’s also renewing. When I last drove the Salmon River Road in late August, green grass was already beginning to spring up out of the blackened soil. The Forest Service stopped by Base Camp in late August to evaluate the damage. It appears that the fire did not leave us with too much damage and the area behind Base Camp should see a full recovery with the benefits of a low-intensity fire. I listen to a lot of podcasts. An enlightening episode I recently listened to titled Fire Ecology, Why We Need More Fire with James Agee, PhD. on the WildFed Podcast #146, it opened my eyes to the damage of too much fire suppression as well as the history of fire in North American ecology. Although I mostly agree with Dr. Agee’s research in regards to fire suppression,  I am grateful for the arduous work of the Idaho City Hot Shot Crew’s efforts to  suppress the fiery-monster that threatened the Salmon River Adventure Co. Base Camp.

So what happened with the Youth Kayak Camp? Thankfully, things were able to continue camp-as-usual albeit 15 miles down river. SRAC received special permission from the Forest Service to evacuate the kayak camp to the Cove Creek Boat Ramp area. Fortunately, this ramp doesn’t get as much traffic as the Main Salmon and Middle Form Salmon permitted trip’s preferred boat ramps – Cache Bar and Corn Creek. Although it says “No Camping” at Cove Creek, we were granted special permission due to the situation. So, tents were setup, hammocks were hung and the kayak lessons continued.

I greatly enjoy riverside camp cooking! But, I had never before riverside cook for over 20 people! And with very little time to prepare for this challenge, my biggest concern was trying to keep food in the coolers cold due to the lack of ice. Yikes! Thankfully, we had some amazing parents, who were adventuring nearby while their kid’s were in the kayak camp, stop by to ask if we needed anything as they headed to the town of North Fork to get fuel when the Salmon River Road was reopened. Yes! Ice! Lots and Lots of ice!!! I never was so happy until they came back with two coolers filled with block ice. Thank you, Nick and Nicole!!! Another challenge was access to drinking water. Although we had very clean vault toilets, the Cove Creek Boat Ramp area is not equipped with access to drinking water.

Thankfully we had fresh water springs with hand-pumps near by so we could fill water jugs every other day. Although my meal plan had to be altered due to not having access to the wonderful resources and tools of the SRAC commercial kitchen, the kayak campers and staff were fed healthy, delicious home cooked meals – breakfast, lunch and dinner. For the first few evenings, Tommy was able to travel down to Cove Creek to eat dinner with us and gave us updates on the conditions back at Base Camp. But, as the fire raced closer to SRAC his visits ceased.

While at Cove Creek, most of our time was spent, to our delight, under beautiful bright blue skies and not smoke. But, the ferocious winds continued to challenge us making it difficult to setup any sort of shade. The NRS River Wing, that we had setup to help give the kitchen area a bit of shade, nearly knocked over a pot of food cooking on the gas stove when an afternoon upriver wind shook it furiously. While the campers and coaches were spending their day kayaking on the river, my amazing kitchen helper Craig, and I, tried to beat the heat, when we were not prepping, cooking or cleaning, by soaking in the cool waters of the Salmon River. I must mention that one of the great blessings being relocated to Cove Creek was the lack of mosquitos! Aaaahhh… Not once did I have to put on any bug repellant while at evacuation camp!

Our early mornings treated Craig and I to a spectacular wildlife show as the deer came down from the rugged mountains for a treat. We watched several does and a magnificent big antlered buck nibble on the dirt in the depression between the boat ramp road and the main road. I also watched a few does nibble on the dirt in the road. What could they be eating? The Salmon River Road, which turns from pavement to dirt as one travels further west, must be treated with something to help keep the dust down, thankfully, as there was very little dust with the plethora of traffic that cruised by our evacuation camp. Magnesium chloride? Could this be what the deer were eating? No matter it was a delight to see.

Wednesday evening as the parade of traffic, in and out, for the permitted floats drove passed our camp, a vehicle proceeded to stop, back up and then take pictures of us as we were sitting around camp eating our evening meal. We smilled and waved to the passerby’s. Little did we know what was to come from the seemingly harmless noncommuicative interaction. But, that will be a story for the next post…

If you haven’t read Part One of The Moose Fire at the Salmon River Adventure Company, please click here.