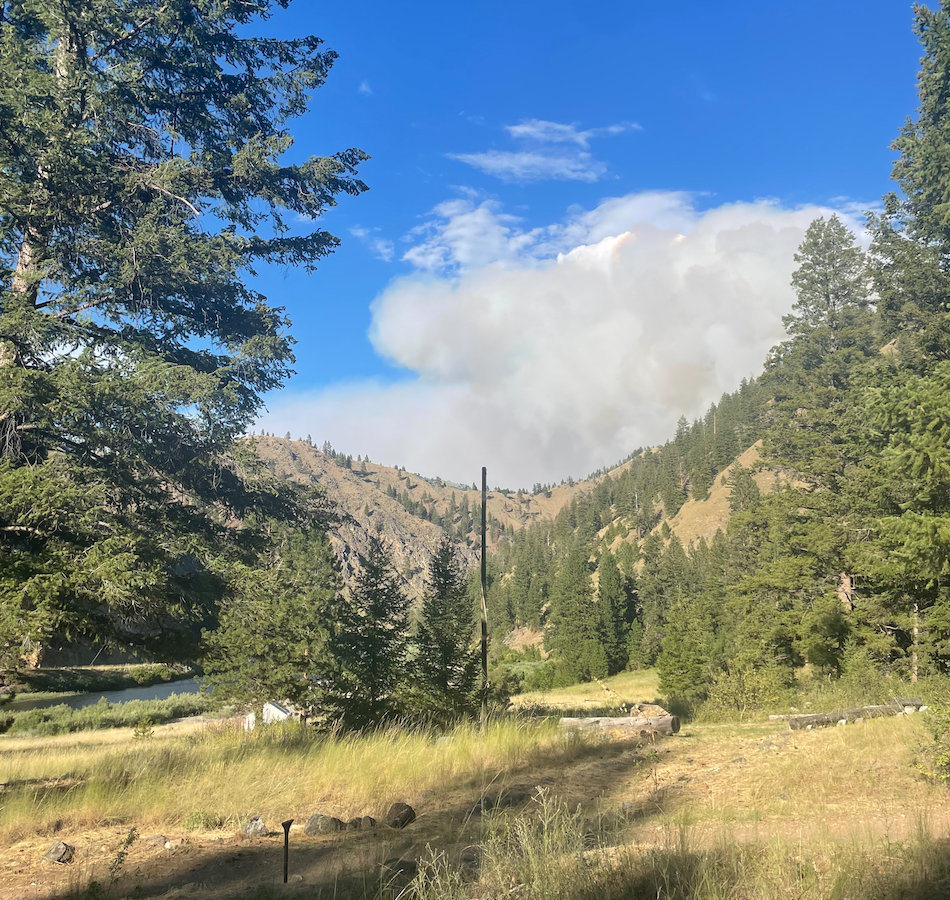 We just finished dinner for 30 that included 10 teen kayak campers, a few parents and the SRAC staff, when I took a walk down to the river to relax and regroup. But relax and regroup was not on the menu for the evening.  As I walked the path down to the river, I noticed a large cloud of smoke that appeared to be only a few miles away upriver. It was a very hot, around 95 degrees Fahrenheit, and a very windy ”DryDaho” evening.  Being new on staff and to this area of Idaho, my heart skipped beat as the direction of the billowing smoke was coming from the main entrance and exit to the area – the Salmon River Road east towards the town of North Fork. The thought of floating the Main Salmon River as the best way to escape the fire crossed mind.

Back at The Eddy, the Salmon River Adventure Company’s dinning area, everyone assembled to get briefed, by Tommy Hilleke, about the current situation. Tommy explained, in a relaxed manner, that  there was a wildfire 6 miles up river that started earlier that afternoon near the Moose Creek-Deadwater area, and that its burning on both sides of the river and the road. Yep, we’re gonna have to float out of here, I thought! With his easy-going style, as tankers and helicopters buzzed nearby overhead, Tommy told us we may be evacuating in 3 or 4 days, but until then we will continue with camp-as-usual with the exception of staff being on high alert. At this time we didn’t know that the fire that started on Sunday, July 17th, 2022 would become the lower forty-eight’s largest wildlife fire for the season, and that it was a result of a human-caused event. Sleep that night was restless knowing there was a growing monster just upriver being fed by a relentless wind that was consuming the extremely dry flora that fills this steep rugged countryside.

The next morning did not bring relief. I awoke throughout the night to smell of smoke as the wind must of died down enough, or changed direction, to give me a reminder of what lurked outside my canvas tent. But, upon rising to start the first full day of the Teen Kayak Camp, the wind was also awake and was increasing in intensity as the minutes ticked by. After breakfast, I headed down to the river to checkout the kayak campers and their instructors, as well as to view the looming threat upriver. It was difficult to tell what direction the wind was blowing as it swirled mightily spitting dirt and sand in my eyes as I walked the path down to the river.

Back in the kitchen, I started prepping for the rest of the days meals,  as well as a few future meals, so I could have enough time later in the week to enjoy more time on the Salmon River. Little did I know at the time that prepping those meals, as well as all the food I placed in the freezer the day I arrived, would be so valuable. As my partner-in-the-kitchen-and-adventures Craig, a few staff members, and I worked away merrily creating deliciousness, the evacuation status of Ready-Set-Go for our area went from “Ready” status to “Go” status in what felt like a blink of an eye. Tommy’s laidback and relaxed manner was now intensely focused as he told us we needed to gather what we can and get it across the river immediately. We are being evacuated!  And, downriver! Main Salmon River float out, here we go!, I said to myself. In less than three hours campers, parents and staff worked diligently to move what we could across the river with the possibility of not returning to Base Camp.